The Louisville Cardinal has been the independent daily student produced news of the University of Louisville since 1926. Its main focus is to be a media outlet for the public concerning the latest news, sports, opinions and features surrounding the University. The interest is to communicate and connect with students, faculty and the public. This is achieved through the Cardinal‘s website. The student writers work hard to produce reliable content for the community.

Early on The Louisville Cardinal was in need of a reliable website hosting company and a website that was easy to update and maintain. During peak times for the University the site would become viral and often crash because it could not support the sudden influx of traffic. Writers complained that they could not accurately post or edit new content in a timely manner. The organization also required space to provide advertisers with an outlet and gain support from the public.

MoDuet stepped up to provide a stable environment that would keep the website up and running during popular traffic times. They also helped The Cardinal launch a new WordPress website with a custom design and functionality. The new website provides the editorial team with a stronger environment to produce quality stories. The website can now support the organization with the help of advertisers and direct donations from readers. 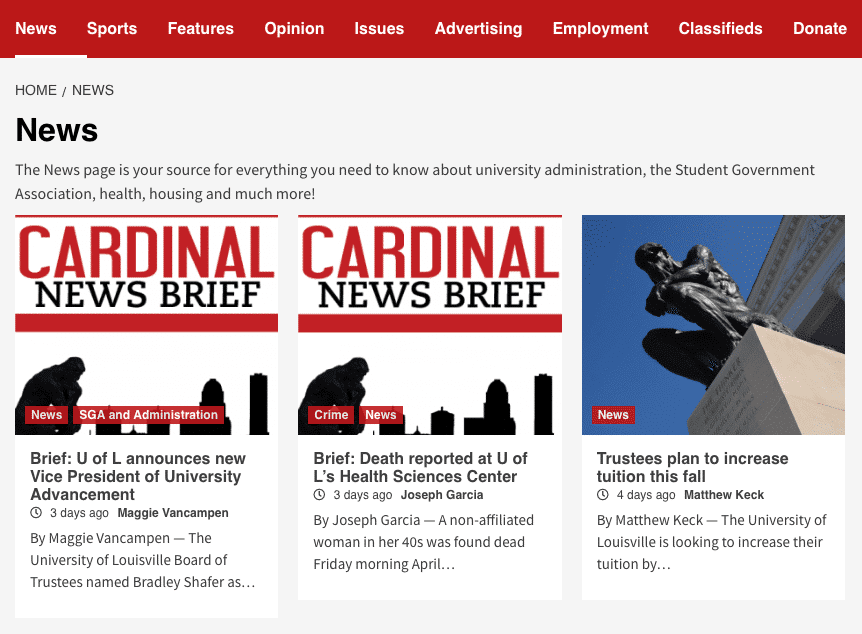 MoDuet continues to support The Louisville Cardinal by maintaining their website. Their partnership is to keep the The Cardinal up and running so that the students can continue to provide quality journalism for the University of Louisville and the community.

The Louisville Cardinal‘s mission is to serve the University of Louisville community by elevating the public discourse and providing a public forum. They pursue the truth through accurate and fair reporting. The Cardinal will uphold its roles as an independent monitor and as a promoter of an open learning environment. Their coverage will comprehensively represent the university in a way that is interesting and relevant. The Cardinal vows to hold firm to its moral compass and uphold the public trust that is the essence of journalism.